What Will You Do With Your Scraps of Time?

Scraps of time.... it's been a month, a long difficult month since we lost our boy Rio. He was a just a scrap of a pup when he was rescued-- 3 months old, 8 pounds of ears and nose literally "sick as a dog" from floating in and lapping up hurricane floodwaters containing who knows what? Joining a household with two active older male dogs, Dusty and Motley, was a huge adjustment for everyone and, in retrospect, not fair to them. But I was undeterred in my quest to be the heroine who rushed in to rescue one of the "Floyd dogs." But I almost sent him back -- twice. Nothing prepared me for how sick he'd be -- for months, how much his trauma would completely derail any attempt at crate training or puppy cuddling, how many scowls I got from the usually fun loving, "kissy" older dogs, and how much money (and time) I'd spend at the vet with him the first four months. But one cold Februrary night in February 2000, Rio wouldn't walk, not at all, not even for a treat. He was diagnosed with severe bilateral hip dysplasia the next day and arthritis, probably exacerbated by his recent romps in the snow. As we drove home all I could think of was bills, more bills, more time off from work to care for him.. but this puppy, this soulful, really serious puppy who always seemed wiser than his years, turned to me in the car and those big brown eyes just said "Mom, I'm sorry I'm such a bother to you" and then a kiss, just a little lick, but a kiss nonetheless from the Rio dog. From that second on, that scrap of time, he had my heart. We got help from the great vets at NCSU and Stony Creek, fixed the worst hip as best we could and life with Rio the Wonder Dog began in earnest!

I lost Dusty and Motley in August and October 2004 and the world changed, especially Rio's world -- he refused to be left out back on the deck along at all, even when I was at home. It was no longer a safe happy territory once shared with his pack and Rio became a total "house dog.". Devouring his "1, 2, 3" treats everytime we left, he was a loyal sentry by the window in the back bedroom through long work days who was overjoyed every time we came home but never anxious when we left -- he knew we'd be back! His only transgression was the occasional foray into the trash when "someone" forgot to put the can in the bathroom and shut the door... when we did... scraps of food. 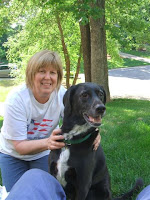 Reflecting back as I now can do, I see that there are so many scraps of time with this sweet, gentle dog and I see now that I did make something with them - wonderful memories, especially since my marriage to Steve in 2006, that I am grateful for-- being able to retire early in late 2009 which meant more time with Rio especially our morning "kibbles & coffee" while we watched House Hunters was "mom time" and Rio always thought everyone made such a fuss over the size of the bathroom! Then there was his enthusiastic, always high stepping "treat dance" when we returned home from an evening out; hip pain or not, the joyful bounding down the driveway in greeting everytime I came home; squeaky toy concerts; the simple joy of watermelon and carrots; licking an almost empty yogurt container for 30 minutes; counting out "time out" when he begged too much at the table; precleaning all the dinner dishes as they went into the dishwasher; a goood rawhide (aka "cigar") after dinner; "dad" rough housing with him and, as they both aged, getting a good rub on his white spot as only Steve could do; early mornings exploring the pasture with Steve, lazy afternoons "out front" taking in the goings on in the 'hood; walks in the park; that big nose pushing against my elbow saying "stop working and play with me"; "teaching" two generations of neighorhood toddlers that you don't have to be afraid of a black dog who's bigger than you are; never having a couch in the evening because "someone" took over; and the quiet companionship while I went about daily life just knowing Rio was there. He was a gentle companion, a quiet, understanding listener... and even an occasional kisser! Sweet little scraps of time.

Age, "thunder terror" and all the steps in our tri-level house took a toll on Rio the past year, and the "decision" about quality of life and how much pain he was in was looming -- Steve and I both knew it and wondered how Rio would make it through a bitterly cold winter without becoming still more lame. Three nights before Rio left home for the last time he and I laid on the living room floor watching TV and I as I rubbed his back and tummy I told him that I wanted him to tell me when it was his time... "let me know, Rio, you let me know, little boy," never dreaming that three days later he would. Hemangiosarcoma is, in most cases, a sudden and deadly disease. Rio's time was quick - a scrap of time from Saturday evening when, after his usual late afternoon walk, he never got up again from his bed. We rushed him to Animal Medical Hospital at 6:00 but by 10:30 Sunday morning, a beautiful autumn morning, weakness and old age and the disease met, and Rio slept peacefully forever as Dr. Fanning helped him across that last bridge. She told me he had not suffered, that his recent "slow down" could have been the sarcoma or his hips, that he might have sensed something was wrong as animals often do. His last food was his favorite Pup-er-oni treat that I brought from home Sunday morning, his last day at home was a lovely cool sunny autumn day (his favorite) and his last moments were spent surrounded by people and smells and touches he knew and trusted - the final scraps of his time with us. What was sudden and gut wrenching for us was quick and peaceful for Rio and for that I have learned to be so eternally grateful. He was, as Steve has said, his own dog who deserved do to things quietly, with dignity, and on his own terms at the end.

When life gives you scraps, make something with them, okay? A scrap can be an opportunity (like Operation Write Home!), a windfall, a set of art pencils, a piece of fabric, a new relationship, giving a homeless animal a new lease on life...whatever scraps you find, be certain before you discard them that you can't turn that scrap into a quilt.

In 1998 I was still swearing I'd "never have a dog in this house" -- 21 years later I'm still not used to having no one to step around in the kitchen or seeing my "new" couch without a cover on it. Dusty, Motley and Rio were each rescued, each grateful and each their own "man." They changed me forever, but Rio's last 7 years as an "only child" is a scrap of time that was especially sweet -- a great life with a a goofy "silly old dog" who lived a complete dog life. I see him and his brothers in the stars above our deck where they look down on us, I know they do. "Good night, little boy, sleep tight, we love you...."
Posted by CARO at 12:24 PM 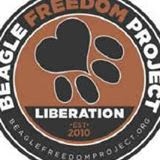 Shelter dogs aren't broken; they've simply experienced more life than other dogs...Do not pity a shelter dog. Adopt one!! And be inspired by their greatness. (dogsrule.com)

CARO
Charlotte, N.C., United States
Welcome to Scraps of Time! Thanks for stopping by! It's been a busy 3 years of "crafty" retirement, making cards for Operation Write Home and then working as East Coast shipper for this wonderful organization for a year. But my shoulders and hip are tellin' me it's time to really retire so we're movin' to a smaller more 'user friendly' place and I'm going to work with Lacie Jane to train her as a therapy dog! Steve is involved in his music and the Mint Hill Historical Society. We suddenly lost our beloved Rio in late October 2011. In late January 2012 we adopted sweet Lacie Jane, a one-year old "treeing brindle cur hound" , my fourth -- but first "girly" rescue dog! Ready to get my new craft room set up and get to work on my long-ignored scrapbooking, maybe some cards later, funky art which I'm learning to love (hard not to be "neat" with it) and some Danielle Steele downtime. 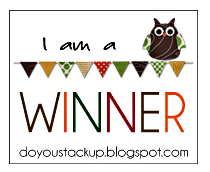 Some of my Favorite Websites!